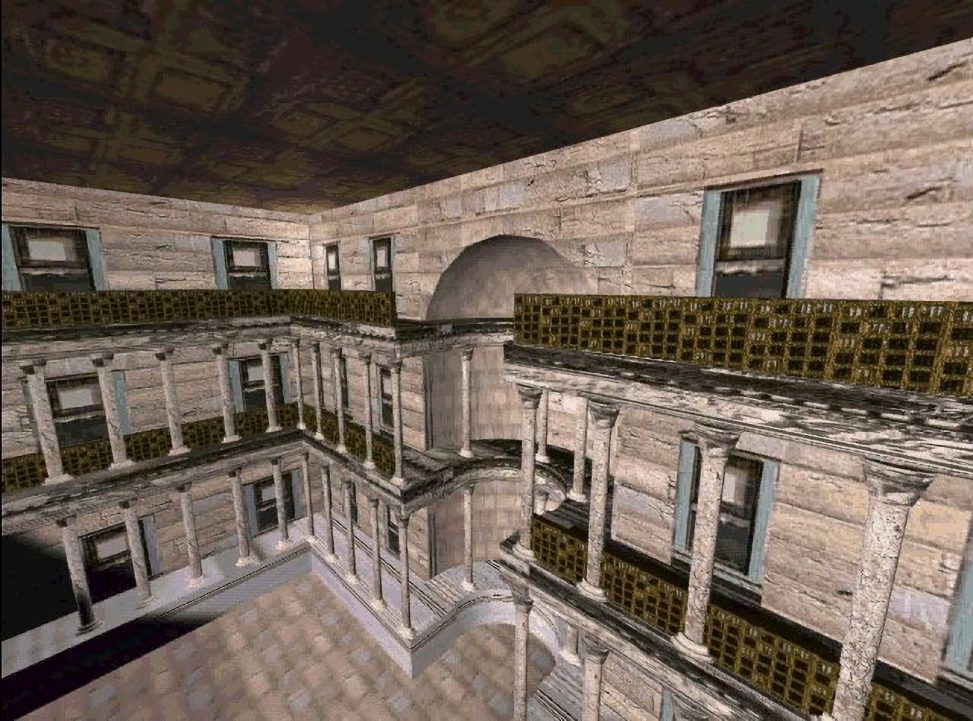 A Senior Project Submitted to The Computer Engineering Department of Dokuz Eylül University In Partial Fulfilment of the Requirements for the Degree of B.Sc. 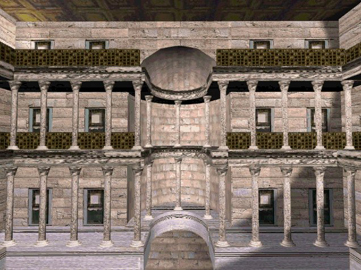 Reconstruction is the abstract “rebuilding” of something that has been lost , destructed using any technique that might be hand-drawing, computer modeling or something else.  Also, a big part of reconstruction is  being able to view or visualize in detail.

The use of computers in generating a reconstruction, as was the case in the example of Celsus Library, greatly increases the possibilities and quality of the representation, and also allows the introduction of very realistic details derived on the basis of real elements found at a site. Through a 3D computer model, it is possible to show the structure to be reconstructed in an extremely detailed form, which is not the case using traditional methods, such as artistic perspective . A 3D model can provide both perspectives from many viewpoints and scaling models. And ,both 2D & 3D images can be generated as a result. 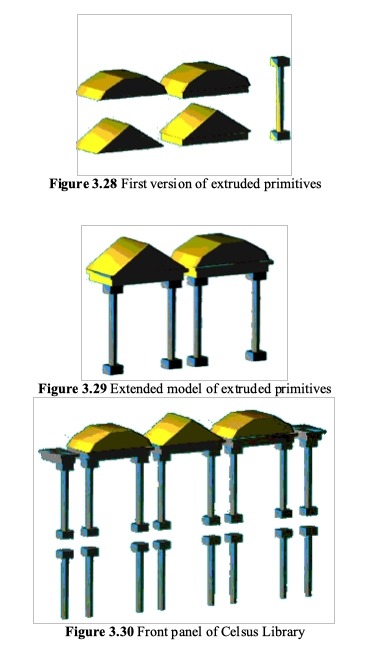 With this perspective, we intended to reconstruct the Celsus Library and  it’s close enviroment which is one of the most popular buildings of the Ephesus antic city.   So,  it is possible to walk-through the site via computer interactively. Besides , Lost parts of the building also can be seen with very realistic details.  That’s why , project gives us the opportunity to  promote Celsus library with high quality and high tech representation.

3D Studio Max is used for 3D modeling and reconstruction. Additionally, VRML gives the chance to publish the model on the Internet and walk-through it from Internet. Project also covers short animated 3D film and multimedia presentation CD  about 3D reconstruction of Celsus library.
Region plan 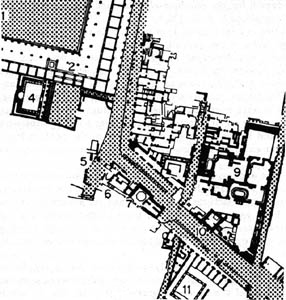 1) Commerical Agora 2) Mazeus Mithridates Gates 4) Celsus Library 5) Ruins of monumental gateway resembling Hadrian’s Gate in Athens 6) Remains of a pool-shaped structure 7) Ruins of an octaganal tomb, first century A.D., with inscriptions on the socle dating from the 4th century A.D. 9) Scholastikia Baths. Originally constructed ca. A.D. 100 and enlarged at the end of the 4th century A.D. by a Christian lady named Scholastica. A large lavatory and a section identified through an inscription as a brothel both belong to the first building phase. The enterance to these two sections is on the merble sacred street. 10) Temple of the Corinthian order dedicated to Hadrian (A.D. 117-138). The second santuary especially built for the cult of an emporer, the first being the temple dedicated to Domitian 11) House on the slope. Constructed in the 1st century A.D. but inhabited for centuries, it rises up on 5 successive terraces each supporting a storey of the same hause. A fresco representing Socrates found here has been removed to the museum in Selçuk. 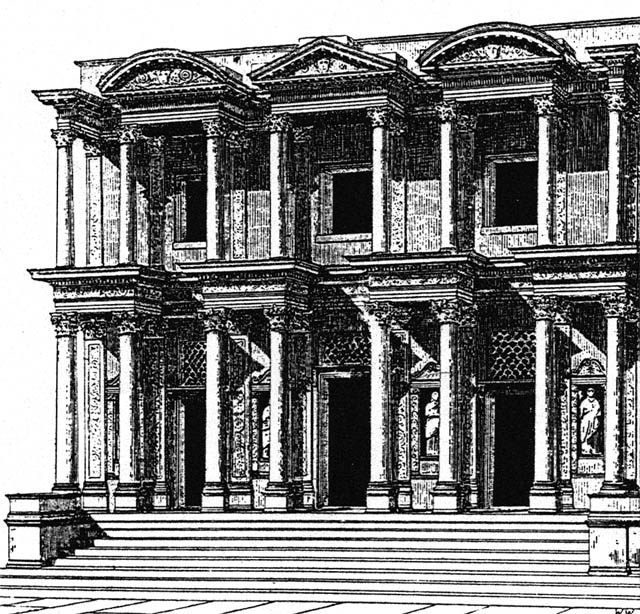 At present, there is no doubt that one of the principal buildings at Ephesus is the extremely well-preserved Celsus library. Its façade was two-tiered; the interior consisted of a single large, lofty hall, measuring10.92*16.72m. , comprising the Celsus library itself, which rose up on a platform built over a vaulted substructure and was reached by a nine-stepped stairway, 21m , in width. A wall surrounded the building on the outside, thus insulating it on each side and ensuring protection against the effects of dampness. When looking closely at the ruins still standing today , one notices an upper and lower row of square niches on the inner faces of the rear and side walls. Originally there existed a third row of niches, so that the interior of the library was three-storeyed. Manuscripts in the form of scrolls or volumes were 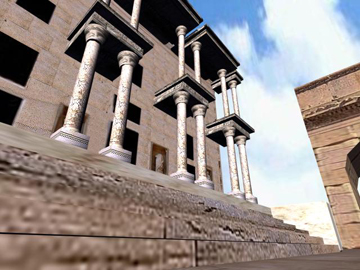 kept in cupboards or on shelves in these niches. Access to the second and third rows of niches was gained by a two tiered gallery of horse-shoe shape, running around three sides of the main hall, much in the manner employed in some modern libraries. A librarian would give the books to the readers. The central niche consisted of a large arch, rising to the height of the third row of niches and very probably, was occupied by a statue of Athena, the patroness of wisdom and learning.
Reconstruction of Inside 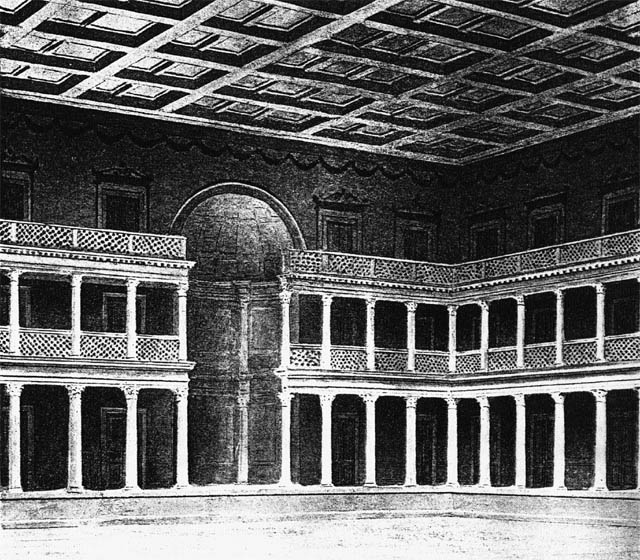 The library possessed a very elaborate architectural façade. It has been possible to make a graphic reconstruction of the entire façade with the help of fragments found during the excavations. Judging by columns bases still in place along the front of the façade, it was supported by four pairs of columns. The remains of the façade wall, which stood just behind the aforementioned bases, show that there were to be found over the entrances, set into the second tier. In this way, the reading room received light through these windows and doors. 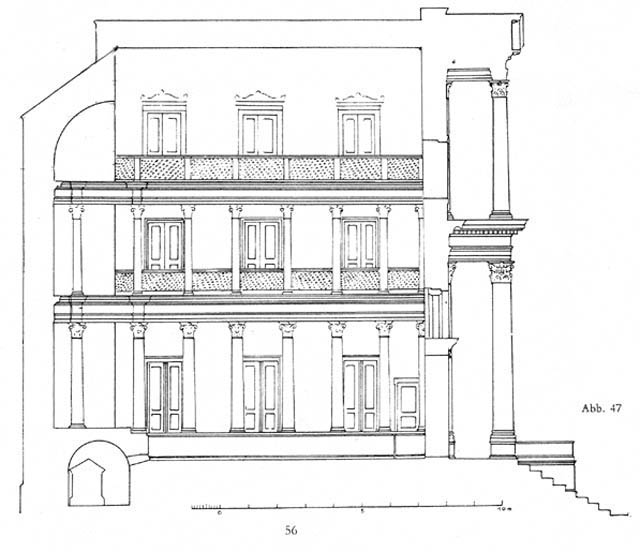 In West Anatolia buildings with multi-storey and pillars (AEDICULA) start at the Roman Empire period. The monumental Nymphaion built according to this plan have faces with three sections. Main face (façade) is in the middle and the other two faces are on each side of it and a little shorter. In the middle is built a big rectangular pool surrounded on three sides by faces with pillars (aedicula). Monumental Nymphaions with aedicula have many niches on their straight back walls and many small niches in the straight walls of those niches with a piece of sculpture in every one of them. We can see the exampleof this type: at the Ephesus Celsus Library, on the façade of gymnasium poestra in Sardes, at the north gate of agora in Miletos and on the faces of skene theatre. Especially the faces of theatre skene are thought to effect the monumental nymphaions.